Congratulations! You’ve purchased your first Mac! Either you came over from the World of Windows, purchased a Mac, or were lucky enough to either be gifted one or received a hand-me-down. In any case one question comes to mind – How do I run the iThing?

“If you’re new to the Mac or a recent Mac switcher, learn everything you need to know to get you up and running with your Mac, quickly and easily!

“No previous Mac knowledge is assumed or required, as the 2½ hour tutorial takes you through all the key features of using your Mac in simple, easy to follow steps.”

OK, let’s see what we can learn.

Simple. Go to the App Store and download the app. It has it’s own self-contained player with all the usual controls – play, pause, volume, back and forward, plus 30 seconds forward or back. You have the option of viewing in letterbox or full screen. It also works with AirPlay, so you can watch it via your AppleTV.

The topics are broken into roughly a dozen chapters, each with their own collection of sub-chapters. The response time for jumping between chapters or sub-chapters is extremely fast because of its own player.

If you’re new to the Mac, this is a no-brainer. I’m a big fan of Tonya Engst’s Take Control eBook series which covers many different categories from software to back-up strategies. But there is nothing like someone sitting next to you and actually showing you how to perform actions on your computer. And there-in lies the brilliance of these apps.

Instead of translating instructions into actions, SCOTutor for Mac presents you with a full desktop screen, on which Don performs all of the functions. If you’re new to the Mac (or even more so, computers in general), you’ll find this method extremely intuitive.

And here’s a tip. If you should be lucky enough to have an iPad, as well, download the iPad version leaving your Mac free to follow Don’s instructions. 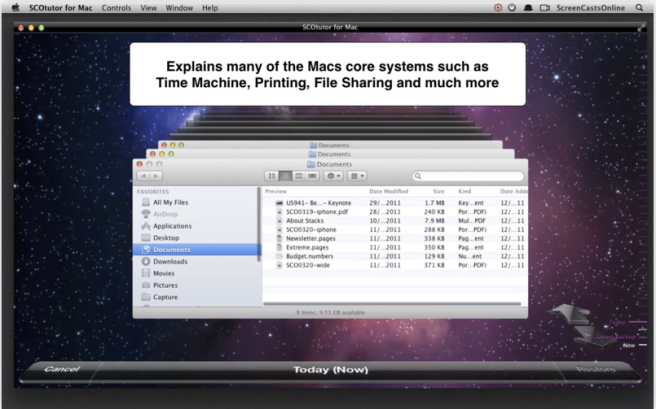 SCOTutor for Mac is extremely accessible. And if you’re not a member of Don’s “ScreenCastsOnline,” you soon will be. Membership entitles you to access Don’s entire back catalogue of software, hardware, and other various tutorials. (You may recognize Don’s voice, as he has produced tutorials for many software developer’s sites.)

So, if you’re a burgeoning fanbois, this app is the answer to your prayers. You’ll be up and running in no time. And if you’re a veteran fanbois, Don always finds several little gems that you probably weren’t aware of.

Simpler to use than a Mac.

Turn on, double click, drop out. View all posts by ympnow