With the release of Music, I have rediscovered the joy of listening to sounds new and revisited as I drive roughly two hundred miles per week. The first thing that I do when I get into my vehicle is get out my iPhone 6S 64GB and connect it to my power source and the radio’s auxiliary input. Then crank the volume!

The sound that the iPhone 6S produces is good. It’s crisp and clean. But as with anything involving media, you can always improve upon it.

That’s the thinking of the folks at ARCAM, producers of high-end amplifiers for use with music and movies for over forty years, they felt that it was time to lend their expertise to mobile devices.

Hence MusicBOOST for the iPhone 6 and iPhone 6S.

“Using only the finest DAC (digital to analogue converter and dedicated headphone ICs from TI/Burr Brown as well as years of experience in making world-class stereo and AV products, the MusicBOOST from Arcam will transform your mobile listening experience!”

In layman terms, MacBOOST takes the audio from your smartphone and kicks up a notch or two by providing greater dynamic range. It’s more akin to listening to your music on a high end audio amplifier (in fact, that’s ARCAM’s bread and butter). It also increases the volume.

The physical design and feel of the device is quite nice. It’s made of a material that provides you with a solid grip without having to really squeeze your phone to prevent it from slipping out of your hand. (In this case, it’s extra important as the electronics weigh a bit and all of that weight is concentrated at the bottom end of the phone.) On the downside, it offers your screen little protection in case you should drop it.

Inserting the iPhone is very simple. Simply slide it into the device and onto the Lightning connector. To charge the smartphone push on the lower left hand button. To see how much charge is in the battery pack push the button on the bottom right.

The best way to appreciate the quality of MusicBOOST’s reproduction is through headphones or earbuds/earpods. I put it through it’s paces with a set of Sennheiser headphones.

I listened to songs that l have played dozens of times before on quality home systems and have listened to through my cans. This way I could make a solid comparison as to the iPhone’s output with and without MusicBOOST, plus how it compared to the song’s reproduction on my aforementioned systems. I was impressed.

It also greatly improves the sound when you just play the iPhone without head gear. Using it’s own speaker, it makes it much easier to play music for your friends – ‘Have you heard this song?’ 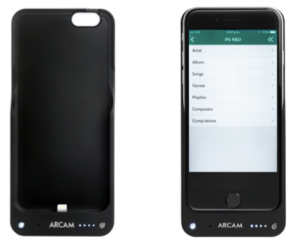 I then ran it through my van’s radio. Even though listening to music is compromised by the sound of your tires on the road, you could clearly hear the improved dynamic range. Acoustic guitars were crisp and bass sounds were neither distorted or muddy but rich and deep.

I did have several issues, however, with the case. First, slipping the iPhone 6S into the device was easy. Removing it was not. It took me roughly about 15 minutes to accomplish on each occasion and involved the employment of a (GULP!) letter opener to extricate it from the device.

I read another review and that reviewer encountered a similar problem. The box states that the MusicBOOST model that both of us had could accommodate either the iPhone6 or 6S. His wife’s iPhone 6 fit nice and snug. No fear of it slipping out. Most importantly, there was no difficulty in removing her iPhone from the device.

But in the instance of the iPhone 6S, once it you insert it, you may want to consider leaving it in there, as the fit was extremely tight.

I contacted the company and one of their reps (after repeated emails) said that he encountered no such problem but would create a video to show me how to easily remove my iPhone. As of this writing, I still haven’t received it.

Secondly, support for the MusicBOOST, for whatever reason, is seemingly non-existent, unfortunately. If you visit their Advice & Support page, you’ll find over two dozen downloadable .PDFs for their other products. Alas, nothing for the MusicBOOST. And their blog (for all intent and purposes) serves as a PR arm.

This leaves you with but one option – send them your question(s) via email from a link on their Contact Page.

Finally, what I hoped would be an excellent bonus, turned out to be a definite necessity. The MusicBOOST is equipped with a battery pack. “Fully recharges the iPhone 6 or iPhone 6s battery with up to 120% extra battery life”.

You soon find out there’s a reason for the inclusion. This unit requires a fair amount of power to accomplish what it does. Fair enough.

The result is that it drains your battery relatively quickly, hence requiring a recharge. I didn’t notice this at first as when I listen to Music in my van, I not only connect it to the radio but also provide it with power using a cigarette lighter adapter.

Once I started to play music off of the iPhone’s battery, the life of the charge shortened considerably. I found it to be even worse when using it during a video chat with my daughter. (Also, the case hindered the iPhone’s onboard mic, in this instance. Whereas I could hear my daughter clearly, what she heard on her end was the volume going up and down erratically, mostly remaining very low. Definitely a bother, especially as I couldn’t easily remove the case.)

Finally, charging it was a hit or miss affair. I used it’s included miniUSB cord, plus two of my own. Sometimes it would charge (following their instructions) but other times it would not. I tried fiddling with it a bit to see if I could discover something that I was doing wrong. But I never found an answer.

So, in the end, is MusicBOOST a boost or bust? When it comes to improving the sound quality produced by your iPhone, it delivers on that promise with stellar results. Unfortunately, it appears that they already had the technology regarding DAC so there was nothing to supplying that. It’s when it came to the case that they hit several snags that they didn’t address.

Should you purchase it? Based on the sound quality, without a doubt. As for all the other aspects, you may want to give it a second thought. Visit their Buying ARCAM page and see if there is a dealer within a comfortable range in your country and decide whether you’re interested.